Neabsco Baptist Church has a deep and honored history that dates back to the early 1900’s, with even deeper ties to the greater Virginia-area Baptist community stretching as far back as the Civil War. This is a passionate and expressive congregation that relies heavily on music as an expression of faith. So, when it came time to expand their ministry with a brand new 500-seat worship center, a state-of-the-art audio system topped their list.

To design the perfect audio solution for Neabsco, architects Loveless and Porter tapped Auburn, Virginia-based Genesis Technology, and after a thorough review of the initial site plans the Genesis team got right to work.

“One of the things we love about the VUE speakers is how accurate they are. Plus, their output is simply phenomenal—more than enough headroom to deal with whatever the church throws at them! They’re extremely versatile” ~ Michael Yoo 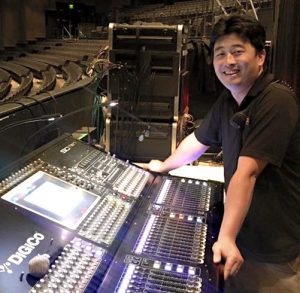 “This church has an amazing choir, but they also wanted to add some contemporary music into their services,” explained Michael Yoo, Sr. System Engineer with Genesis Technology. “We needed to accommodate a full band, including bass, drums, guitars, as well as three keyboards and a Leslie organ. In short, the sound system needed to handle everything from rock to gospel, as well as traditional worship selections.“
Yoo’s team joined the project early and already had a clear plan underway when a last-minute budget pinch resulted in a decision to lower the sanctuary’s ceiling height. But ingenuity is born of experience, so the Genesis team reopened their bag of audio trickery to come up with an alternative amidst the last minute shuffle.

“Overall it’s a pretty straightforward space—just a rectangular box with relatively clear sight lines,” explained Yoo. “We initially planned to install VUE’s al-4 subcompact line array, because we knew the beryllium high frequency would provide plenty of headroom and fidelity. But when the ceiling was lowered, it was obvious that even the compact al-4 would be too disruptive visually.”

With the beryllium identified as a “must have,” option, the Genesis team ultimately recommended VUE’s h-Class high-definition two-way systems as a better fit.

Yoo continued, “We also had to convince the Church’s audio engineer who wasn’t terribly familiar with VUE. We arranged a demo at our Auburn facility, and he was instantly impressed with the vocals and top end of the h-Class, which was no surprise since those models benefit from the beryllium high frequency.”

With approval secured, Yoo special-ordered four h-12 systems in passive configuration—without their usual integrated VUEDrive electronics. Instead, two rack-mounted V-4 VUEDrive Systems Engines provide all power and processing, including delay for the mid-room units. The four cabinets were custom-ordered directly from VUE in white, along with color-matched mounting yokes.

With 12 rows of pew seating arranged in four columns from front-to-back, Yoo opted for the h-12W (wide) models, which offer 100-degrees of horizontal coverage and 50 degrees vertical. Two h-12s are hung above the main stage, with two more halfway back on delay.

“Coverage was pretty much spot-on with little more than basic visual aiming,” commented Yoo. “One of the things we love about the VUE speakers is how accurate they are. Plus, their output is simply phenomenal—more than enough headroom to deal with whatever the church throws at them! They’re extremely versatile”

The church celebrated the opening of its new worship space last month, and so far church leaders and worshipers alike are very pleased.

“I love the VUE systems,” concluded Yoo. “The products perform extremely well, and everybody at the company is really easy to work with. The hard part is just getting people unfamiliar with VUE to consider it. But once they hear it they’re sold. They simply sell themselves.”