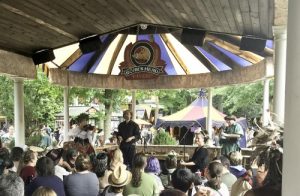 One Systems Direct Weather loudspeakers at the Boar’s Head Tavern stage at the Maryland Renaissance Festival in Crownsville, Maryland.

ProSoundWeb
The fictional 16th-century English village Revel Grove, located in Crownsville, Maryland, recently upgraded the audio quality of their Renaissance Festival stages with One Systems loudspeakers. The upgrade was designed and installed by Mid South Audio, located in Georgetown, Delaware.

“We have been working with the Maryland Renaissance Festival for 10 years,” explains Michael LeCates, associate director of operations, Mid South Audio. “We originally provided sound for national acts that are occasionally brought in to perform at the festival. Over time it became apparent that they needed to upgrade their PA throughout the festival grounds. We demonstrated the One Systems loudspeakers and they were sold on their audio quality and direct weather capabilities.”

The festival, spread over 25 acres, is the second largest in the country. It opens on the last weekend of August and runs for nine weekends. The grounds tout 10 stages and a substantial jousting arena. Mid South Audio upgraded five of the stages with One Systems loudspeakers and installed another distributed system at the jousting arena. Similar upgrades are planned for the other stages in the future. 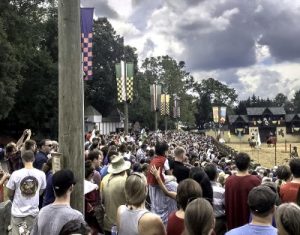 One Systems 106/HTH loudspeakers distributed around the jousting arena

weathLeft/right systems of two 108/HTC loudspeakers, positioned to the left and right of the stages, were installed at each of the stages that offer live music to thousands of attendees. The stages that feature speakers and performers were equipped with left-right systems made up of 106/HTH loudspeakers. Because the jousting arena is circular in nature, LeCates specified 14 106/HTH, distributed around the rim of the arena.

“The festival production team wanted the systems to be as discrete as possible, to visually keep the performances in the Renaissance time period as much as possible,” adds LeCates. “Fortunately, the 106 and 108 are very compact while providing the high-quality audio necessary, along with the control and coverage the audience areas require. We made much effort to hide the loudspeakers whenever possible.”

Both the One Systems 106/HTH and 108/HTH are two-way loudspeakers designed for use in marine environments and general purpose inland environments. The loudspeakers utilize 316-grade stainless steel (marine-grade) for all structural and rigging points as well as rigging accessories. All metal components that are not structural feature a newly developed marine-grade powder coat over 304-grade stainless steel. Both loudspeakers offer an installer configurable High Z or Lo Z mode.

“The festival team is extremely pleased with the new systems,” concludes LeCates. “The upgrade is a definite bonus to attendees. I am confident their durability will blanket the festival with high quality audio for many years to come.”