The more one learns about microtrenching, the crazier the old way of bringing in optical cable seems. 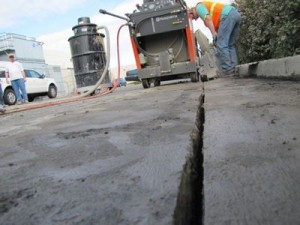 I can’t imagine sitting before a corporate board or explaining to city planners why it’s necessary to uproot concrete and move tons of dirt just to bring in something as small as optical fiber. I certainly wouldn’t want to have to show them a strand of fiber in any case, which is not much thicker than a strand of hair.
Digging up streets and landscape to trench down four feet or to set up deep bore pits seems a little excessive. And, climbing up a pole in a thunderstorm to string across fiber cabling is just plain crazy.
But, deploying fiber cable in a micro-sized trench that’s little more than an inch wide and less than a foot deep? Now that sounds like a sane idea.

It’s why FTTH is coming around; we can thank microtrenching for getting us a little bit closer to the network of the future. Microtrenching is going to be hugely helpful in getting fiber to homes and solving the so-called last-mile – the distance between the fiber backbone and the TV set. It makes it possible to bring in high speed, high-capacity fiber connectivity that is needed for all that big data coming down the line.
And, most important, microtrenching finally makes it affordable for businesses that want and need the same kind of capacity, not to mention the security that fiber optics offers. 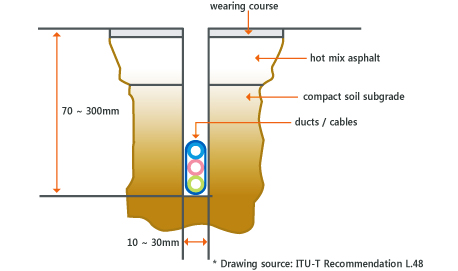 ITU Recommendation
A microtrench is described as a narrow, shallow trench. To cut into asphalt, a saw cut is needed, typically at a depth of seven to 12 inches and 0.5 to 1.5 inches wide. Ditch Witch has specifically developed a micro trencher for this purpose, for example. There are a couple of methods for microtrenching in optical fiber. The fiber cable can be buried directly into the saw cut, which can beuseful for short or temporary runs.

Or, one of the more popular methods is to air-blow fiber into a conduit. This has been a popular option for cable installation in general since the British Telecom introduced it in 1980. How this generally works is that once the conduit is buried, fiber strands are blown in using an air compressor. Fiber is stored in compact trays and is fed into the conduit using air pressure. The number of air-blown fiber strands is limited to the conduit, with 216 strands currently at the top of capacity. The nice thing about this method is that you can add strands later as needed.

The “inlaid” method is another option, and is useful for longer cable runs without the need for splicing. In the Vertical Inlaid Fiber (VIF) method, a two-piece vertical deflection conduit (VDC) is zippered together (using a specialized “zipper” tool) with the fiber inside, which then slips into the saw cut. This conduit can withstand something like 2000 pounds of pressure per linear inch, which means it has the reinforcement needed to make those long fiber runs. This method also makes it possible to set up “slack holes,” so you can extract the VDC for adding on a branch, for example.

All of this can be done with a crew of less than five people and using light construction equipment. A city block can be completed in a day and with very little, if any, interference to tree roots, utility boxes, and traffic. Plus, with microtrenching, if there’s a break in the line, it’s easy to repair.

Going from Here to There
Microtrenching is relatively new, but it gained a great deal of traction two years ago when Verizon went in search of a way to bring in broadband to Manhattan homes without ripping up the streets. After clearing all city regulatory requirements, Verizon got the go-ahead to microtrench to connect FiOS to a small cluster of South Bronx apartment buildings. Eventually, the telecommunications giant will microtrench in fiber to other locations across all boroughs in New York.

Verizon is pioneering with Corning the microtrenching technology to connect its FiOS network through narrow cuts in the seams of sidewalks. Hardened plastic ducts are placed beneath the seam between the sidewalk and the curb. These conduits are hardy – able to take the blows of a shovel, for example, and therefore able to withstand sidewalk repairs.

Doing it the old fashioned way with deep excavation would have easily cost the telecommunications company twice that of microtrenching.

For those on the corporate side, we are able to take advantage of all that technology and learning taking place in the consumer sector. Microtrenching puts fiber optic connectivity within the realm of possibility for many businesses, whose existing leasable or built out fiber ducting is at capacity or doesn’t go far enough to reach the endpoint. Or, for whom copper connectivity has reached a dead end.

Implementation costs are very consistent, and unlike the crazy old way of bringing in fiber, there are none of the surprises of having to work around tree roots and traffic.