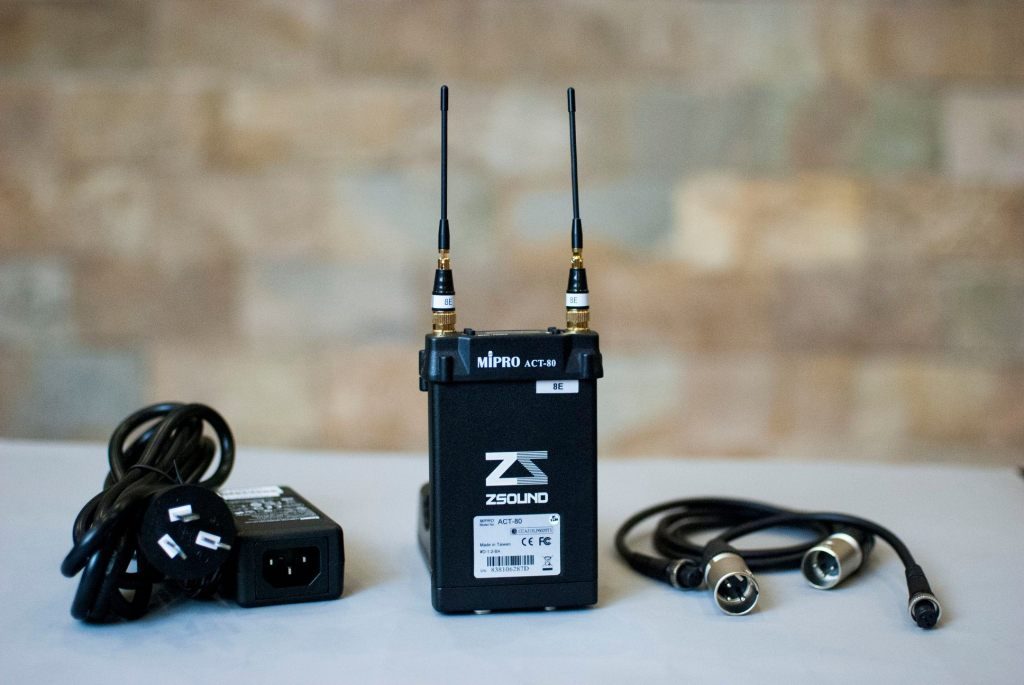 For the past 2 weeks, I have been field-testing the MiPro ACT-80 ENG kit. Now if you aren’t familiar with the ACT-80 or even the company MiPro don’t worry, they aren’t well known in the USA for their TV Film gear.

MiPro specializes in audio gear that is installed in Hotels, Expo Halls, Museums, Theaters and House of Worship. So think podium mics, rack mount gear, and portable PA systems. But over the years as they have been able to fit multiple receivers into a rack-mount receiver that has sort of spun off a circuit board with just a single channel to make ENG/Camera mount receivers. The ACT-80 is their new ENG receiver to receive this treatment. Like I said earlier, MiPro is popular with the install crowd, people who are ordering $30,000 worth of gear, and thus all marketing in the USA has been aimed at this type of client. MiPro also does MOST of its sales outside of North America in places like Africa, South America, and Asia. If you look at their website you’ll see they have been a market leader at bringing new tech to the wireless microphone space. Though, a funny side story about MiPro, a few weeks ago I was attending a Tax seminar in LA aimed at helping sound mixers who file 1099, and in the front of the room next to the projection screen what do I see? A MiPro PA system. Like I said, they are popular, just not with the TV and Film crowd.

So know that we have the non-TV Film history about a popular non TV Film company lets talk about the ACT-80 itself in regards to TV and Film. Here are the specs:

Note
Refer to actual product in the event of product discrepancy.
Ok. So Spec list are boring but needed. Let me break down what MiPro loaned me to test for this review.

I had the ACT-80 ENG receiver paired with a ACT-80TC body pack transmitter. They also sent me the ACT-80TC battery dock so I could recharge the transmitter over night.

The body of the RX should look familiar to most, its a standard ENG Camera style slot receiver but it is different then those from Audio Limited, Wisycom, Sennheiser and Lectrosonics. The ACT-80 slot RX does come with interchangeable bottom plates, the one I received was a AF out / DC in plate but I could have also asked for a 25pin Panasonic camera slot plate. Notice that I said 25pin Panasonic and not SuperSlot. Superslot and 25pin Panasonic both use the same connector, the same analog audio pins, and the DC input pins are the same BUT SuperSlot also has pins for AES and UART. The differences and all the features are listed here. But know that a 25pin Legacy Panasonic slot receiver will still work in SuperSlot devices like the PSC RF Six Pack or Sound Devices SL-6. The other difference ACT-80 RX is a single channel receiver. 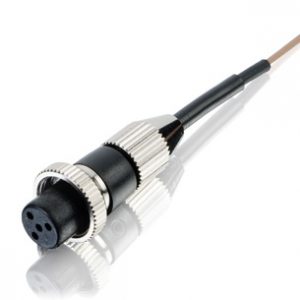 Now I had the AF out / DC in plate went to me as I don’t operate any SuperSlot gear. The AF out is a locking TA4m which is also going to feel different if you are use to seeing non-locking TA3m connectors on the other brands but not to worry MiPro ships 2 different locking TA4f to XLRm cables with the ACT-80. One of the cables is 6” the other felt like 18”. The DC input jack is your standard locking 2.5mm DC jack like everything else you’d find in your audio bag. Another thing you should note about the AF out is it comes with two course settings to set the output level, you can choose from either Line or Mic. There is not adjusting the sensitivity in between. For my purposes and test I sent all my audio out at mic level.  I also did it this method because of how the TX lets you set up your lav’s levels. The TX uses a course gain structure that lets you loosely dial in your input level. Between the TX’s roughed in level and setting your RX to mic level output I used my recorders digital trim to dial in the finer details so my audio was hitting between -12 and -20 dBFS. 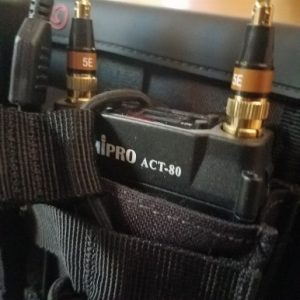 The transmitter and it’s feature set is the true modern marvel from MiPro. For all the “oddities” of the ENG Slot RX it is the TX really makes this kit feel awesome to use.  The transmitter has a audio limiter built in, which comes in handy given the course audio gain system in place to dial in your lavalier’s audio signal. It also isn’t very big. Its shorter than a Sennheiser G3 and a little less thick but the same width. You still will want to use a large URSA strap with it but it won’t fill the pouch like a G3/G4. The ACT-80TC also features metal tabs on each side for using a charging dock like the Sennheiser G3 but unlike the newest Sennheiser G4 which still uses NiMH rechargeable AA cells in its “rechargeable adapter pack” the ACT-80TC is Li-Ion native! The TX uses a interchangeable 18500 cell when most would use AA or AAA cells.  This is BADASS. 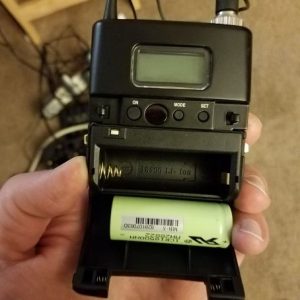 If you have been reading our site for a while now you know about my recent love for the 18650 cells. Hell I’ve written 3 blog post about them HERE, HERE, and HERE. Well the 18500 is the shorter brother to the 18650 but still energy dense as hell! Panasonic makes an 18500 cell that is 8.5wH. And because of all that juice in such a small transmitter, this unit will run for 13+ hrs… longer if you drop the power down from 50mw to 10mw. At the 10mw setting and the Panasonic 18500 cell you would be looking at nearly 20hrs of run time. And going 3.7v Li-Ion native is the future for our gear. We know this and MiPro is already there with the ACT-80TC.

So audio limiters and lithium isn’t exciting you about the TX… well its also a 100% digital signal. Plus the ACT-80 kit is 64mHz wideband so when you run your scans you will always find a clean channel. If those two fun facts about the RF signal aren’t fun enough lets talk encryption. The ACT-80 lets you enable a 256bit encryption code into the RF signal. The ONLY way to get that password is to use the IR sync port on the RX to give it to the TX. This means if you are on a high profile gig that no one else in the room or outside can tune into your signal. Even if they have your frequency dialed in and happen to also own MiPro units, they are out of luck. This makes the MiPro 8-series as a whole very safe to use when you need to transmit audio securely. If for what ever reason you disable and re-enable the encryption on either the TX or RX you need to resync the units using the IR blaster because the RX has already shifted to a new randomly selected secret 256bit password. 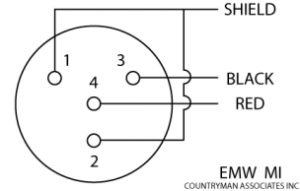 Overall the MiPro ACT-80 kit is a pretty great package, especially when you consider the kit comes in under $1,000 USD. Oh right, I forgot to talk about the price. So the ACT-80 ENG Slot Receiver is only ~$550-580 USD. And the ACT-80TC Digital Wideband Transmitter is only ~$300-400. Now you don’t need to buy the TX docking bay, any Lithium Ion charger that can handle round cells will work. Heck, even the charger we build in our first article on 18650 cells would work. So for just under $1000 you can have a brand new bag style wireless kit that is 100% digital, features an analog limiter, and can be run off a standard BDS box in your bag.

Who Should Buy This?
Youtubers / Digital Content Creators: No. Even though these are a fairly easy system to use they require more professional accessories than what most Youtubers have laying around. The ENG Slot receiver can be run off Sony NP batteries but probably wouldn’t be the easiest receiver to rig up onto of a DSLR.

Videographers: Maybe. If you are using a big shoulder mount ENG camera that features a slot for audio recievers than yea, this is a great budget option for you to really utilize that option on your camera. The encryption aspect of the kit may also be of great interest if you shoot a lot of news coverage. The 10mw setting is more than enough for your average talking head host to camera type productions.

Professional Location Sound Mixer: Possibly. The MiPro ACT-80 offers a lot that is missing from most sub-$1K audio kits. And it really should because it is the most expensive system on the market in that sub-$1K category. The real question is for the price would you rather buy something new and 100% digital for about the same as a used analog Lectrosonic um200/ucr211. The ACT-80 sits in a funny spot… it’s better than  prosumer gear like the RODELink and the Sennheiser AVX but it sits on the budget friendly side of the higher end professional gear. The ACT-80 would be a good beginner pro-wireless for someone making the move to become a full time professional but doesn’t want to rack up a lot of debt at the beginning of their career.

About the Author
Andrew Jones is a location sound mixer based in Los Angeles. He started in the TV and Film industry in 2004.