Mix Online  –   It’s often been said that Country is the new Pop, and The Band Perry are among its fastest rising stars. The band’s three siblings—Kimberly Perry (vocals, guitar, piano), Reid Perry (bass, vocals) and Neil Perry (mandolin, drums, accordion, vocals) exploded onto the music scene in 2010 with their first single, “If I Die Young,” hitting number one on the Billboard charts and their debut album striking quadruple-Platinum status. The band has since toured with the likes of Reba McEntire, Brad Paisley, Rascal Flatts and Blake Shelton, garnering a Grammy award, CMA awards, and ACM awards along the way.

The band’s youthful exuberance and sincerity are a big part of their appeal, and key to the connection with their audience. Despite a quickly growing profile playing to ever-expanding crowds, The Band Perry maintains a closeness with their fans that belies their fame, eschewing quick after-show escapes in favor of generous meet and greets and up-close interviews.

“They’ve been playing together for 16 years, and they’ve always understood it’s about the fans—without them, there’s nothing,” explains Red Light Management’s Gaines Sturdivant, part of the band’s management team. “They’ve always been dedicated to giving their fans the best performance experience possible.” 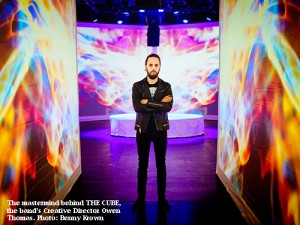 It’s this dedication that led The Band Perry to their newest endeavor, a powerful yet intimate performance environment called THE CUBE. The brainchild of the band’s Creative Director, Owen Thomas, THE CUBE is a four-sided room whose walls are large 11×30-foot video screens. Guests enter through a corridor formed by two more screens, surrounding the band, who perform in the round on an 8-foot circular stage in the center. Images and graphics are rear-projected on all six screens, creating a living, breathing backdrop to the band’s performance.

“Every year in June, the band does a special show for their fan club members,” explains Thomas. “The genesis of the concept for THE CUBE really came from their desire to do something different for the fans this year. They’re always looking at pushing creative boundaries, and that’s exciting for me, to create new experiences and come up with concepts that haven’t been tried before. I had this idea to build a mobile, immersive projection arena, and the band really liked it. We’re always discussing new performance ideas, new film ideas, new musical ideas, new design ideas, and here was an idea that encompassed all of that.”

Evolution of the Concept

Inside THE CUBE, the environment is minimalist—a small, circular stage surrounded by enough space to accommodate about 250 people. Images are rear-projected on each screen, with audio, cabling, and trussing all outside and out of view. “Aesthetically, when you’re inside THE CUBE, it’s clean,” Thomas offers. “There are no cables, no rigging components, no speakers, no mic stands, nothing. All the structural components of THE CUBE exist outside the four walls.”

Content is largely abstract, with colors and textures dominating. “We shoot everything on high-performance cameras at macro levels—we love that edgy film-stock aesthetic—really normal items like exploding powder and liquids and enamels mixed together,” says Thomas. “But everything comes through a lens. Then we put it in [Adobe] Premiere, color it, add a bunch of effects, and use it to create a very rhythmic and dynamic musical accompaniment. We feed it to a Christie Spyder system, which distributes it across six fully autonomous projectors. You can have content chase itself, have one thing happening on two walls and then a different thing happening on another two walls.”

Though THE CUBE does borrow some aspects of projection-based Virtual Reality environments, Thomas points to a critical difference: “VR is an experience that demands a certain level of involvement from the user—they put on special glasses or headgear and focus on a simulated environment. THE CUBE is designed to enhance and support a real-life performance. There are no devices, no learning curve, just come into our little space and let us entertain you. We’re not putting overly distracting narrative content on the walls, and we’re not pulling your attention away from the band. On the contrary, our goal is to augment the performance, to rhythmically and visually make the music come alive. The walls are never going to distract you from the reason you’re there, which is the artist.” 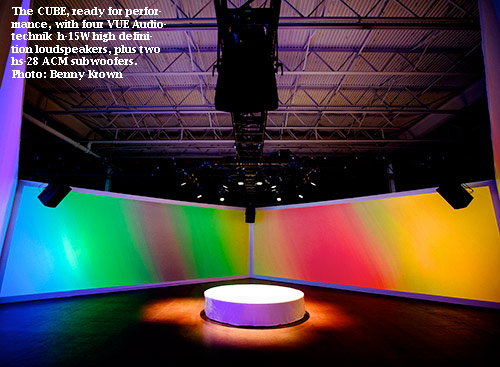 As The Band Perry’s FOH engineer Jon Garber recounts, the VUE connection was serendipitous. “I was at a rehearsal hall in Nashville, talking with my friend Hugh Johnson about THE CUBE idea. He got it right away, and he introduced me to Jim Sides [VUE EVP], who was in town for the CMA Music Festival. Two weeks later we were back at the same rehearsal space, and VUE had set up a proof-of-concept system for us.”

Thomas recalls the demonstration: “I walked out to the middle of the floor and said, ‘Okay, press play.’ Thirty seconds later I was saying, ‘Put it in a box and pack it up with THE CUBE.’ The sound was so beautifully detailed, so crisp and clear and defined—it was perfect.”

A tight, powerful low end was an essential part of the brief, adds Thomas. “The visual components of THE CUBE are very rhythmic. Swimming, nebulous bass response wasn’t really an option—it had to be tight and focused, so the rhythmic components could really be accentuated. The VUE subs are exactly the right balance of powerful and punchy.”

“The subs surprised us,” Garber agrees. “We started out with four, and quickly realized we only needed two.”

Garber mixes the show on an Avid Venue SC48, blending the band’s live components with stems from their studio recordings. “A lot of the audio is tracks from the band, and we bring in their vocals and some instruments live,” he offers. The mix is dual stereo. “We started off with a 4.1 surround concept, but we found it was more effective to work with dual stereo zones, so everyone can get a stereo image from pretty much anywhere inside THE CUBE.”

The mix position offers its own challenges, says Garber. “You’re essentially mixing from outside the venue, with no visual contact to the band. Fortunately, we’ve been working together a long time, and there’s a strong trust between us.”

Of course, the sonic challenges filter down to each venue’s acoustics. “Because THE CUBE needs at least 20 feet of height, we’re mainly in larger, acoustically challenging spaces,” says Garber. “The VUE h-Class is definitely the right P.A. for that. It’s very focused, very tight. The horn is very coherent. Phasing is not an issue at all. Even with four speakers facing the stage and four live mics, we’ve had no feedback issues.”

“Probably one of the biggest challenges in an environment like this one is bringing in the vocals and fitting them with the track, making the sound consistent with the track,” Garber observes. “With the h-Class system, the tracks sound super clean and clear, and that meshes easily and seamlessly with the live sources. It sounds simply stunning—brilliant, punchy, powerful, and tight. What else can an engineer ask for?”

Thomas adds, “When I talked to Jon the very first time about THE CUBE, I said we needed a serious audio system that would really compel people on a level that complemented the visual. It needed to hit hard and sound aggressive, but it needed to be very pristine. The h-Class did exactly that.”

With room to accommodate only about 250, THE CUBE fits well with the band’s ethos of staying close to their fans. “The most compelling aspect of THE CUBE experience for an audience member is not the visual, it’s not the audio…it’s the proximity to the band. You’re literally a foot away from the artist,” Thomas says. “It’s a much different performance for the band, as well. If you’re playing an arena, you’re playing to the back rows. If you’re performing for an immersed audience of 200 people, every glance matters, every movement of your body matters, everything connects. It really is geared toward intimacy.”

Needless to say, THE CUBE’s intimacy limits its practicality for larger audiences, prompting the question of scalability. “The conversation will never end on how to make this experience workable for a larger audience,” Thomas offers. “How big you can scale the concept? I don’t know, but we’re having those discussions. The band wants to keep moving in that direction. I think it’s the future of live performance—something more inclusive, where the audience is part of the performance, as opposed to simply being spectators.”

The Future of Country

Forging new ground is never without its challenges, and THE CUBE continues to evolve with every gig. But if audience response is any indication, THE CUBE has already exceeded expectations.

“The Band Perry is a very forward-thinking band,” says Thomas. “They’re really focused on keeping the core storytelling tenets of country music alive, while at the same time embracing the future of music and performance. And I feel we’ve found something that just might be a part of all that.”

Sturdivant sums it up: “a lot of people are talking about how to transform the concert experience to be more participatory, more immersive, and this is a generation that has grown up expecting that kind of connection. These are the early steps on a journey that we are really proud to be a part of. I think the sky is the limit.”