Foothill Ranch, California | October 2020 The Bahá’í House of Worship in Wilmette, Illinois is a beautifully ornate building, featuring a main worship auditorium that rises 138-feet to its ceiling. Stunning and intricate white ornamental concrete and crushed quartz patterns sit upon the internal façade, supported by 54 columns that gird the main seating area. The design also creates nine separate alcoves of seating, each angled toward the center of the room. A single lectern sits between one section of the pillars.

The House of Worship is, according to the Bahá’ís of the United States, a “quiet and safe space to go inward and revitalize your sense of purpose in the world.” The worship space is open daily from 6 a.m. to 8 p.m. and is used, primarily, for “personal prayer, reflection, and meditation.”

Still, there are moments when the worshipers require live sound. While the Bahá’í Faith has no clergy, members do lead daily devotionals twice a day. Also, on the first three Sundays of every month, the Baha’i House of Worship choir performs. When sound amplification is necessary, there is a need to reach every member of the room – even though the building’s unique and impressive layout introduces some architectural peculiarities that deter audio performance. 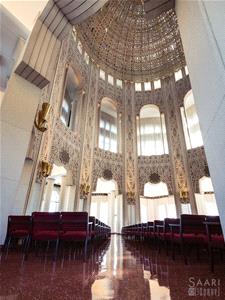 Thus, the Bahá’í House of Worship relies on Renkus-Heinz solutions to place sound precisely where you want it most: on the audience.

“The Iconyx allowed for us to address the seating area with better coverage and gain before feedback than the original array,” said Erik Saari, Vice President of Sales & System Design at Sound Planning Associates – the firm that integrated the system. “The new system improved intelligibility and coverage while remaining invisible to the audience.”

The Renkus-Heinz ICONYX IC24-RN is the primary loudspeaker used in the House of Worship. ICONYX arrays make use of Renkus-Heinz’ industry-leading Louds, allowing venues of all size and type to digitally position sound exactly where you want it: on the audience. By programming the arrays digitally, the sound stays off the peculiarities of the room and is directed entirely toward the audience’s ears.

That ability to flexibly program the ICONYX steerable solution proved to be critical in the integration. The speaker needed to be placed behind a curtain, and directly behind the lone lectern in the space.

“Using Renkus-Heinz’ solutions were critical here because, through the software, we were able to adjust the acoustic center to a higher point on the array,” said Aaron Johnson, the AV Consultant at Threshold Acoustics who designed the system. “This allowed us to avoid the lectern and to get much, much better coverage up close in the front row while still placing sound all the way at the back.”

The system also utilized six Renkus-Heinz TX81 Compact Two-Way Complex Conic Loudspeakers to improve coverage across the challenging alcoves in the House of Worship. Those speakers are hidden as well – behind ornate grates that were once used by an old HVAC system.

“Having integrated many Iconyx systems over the years, I would place this project in the top five,” Saari said. “The client was initially concerned that the array would not cover the area; but in the end, they were impressed with the outcome. Renkus-Heinz has consistently delivered outstanding loudspeakers and dealer support for us.”