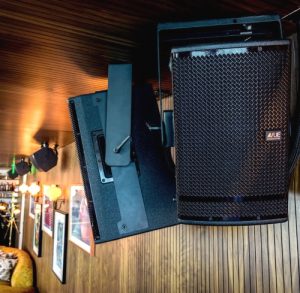 ProSoundWeb
Bryan Bilgore, president of Sensorium AVR, was tasked with system design for the Luckman, a club within Soho House West Hollywood.
His choice for sound reinforcement included loudspeakers from VUE Audiotechnik.

Used as a lounge and a function space for the House’s creative-elite members, the open-late Luckman was dedicated in late January, 2017.

“Knowing top-flight talent would use, and listen to, the Luckman system on a daily basis, we set out to deliver next-level sonic performance that would be reflective of the no-compromises approach apparent throughout the venue,” explains Bilgore.

“Furthermore, we needed to achieve this from a rather small footprint, and against an aggressive remodeling schedule.”
Bilgore also wanted a system that would function in a range of applications. First as a PA system with monitors for live performance, as well as a dance music system for guest DJs, and finally a foreground system for distributed music.

Beginning with the main PA, Bilgore specified a combination of VUE Audiotechnik’s h-Class powered systems, including the beryllium-equipped h-12 loudspeakers, and hs-28 dual 18-inch subwoofers with patented Active Compliance Management (ACMTM) technology.
“The combination of beryllium compression drivers and ACM-equipped subwoofers allow the VUE systems to deliver a level of detail and clarity that you simply cannot find in other comparably sized systems,” explained Bilgore.

In addition to the h-12 and hs-28 subwoofers, VUE’s h-8 compact speakers — also with beryllium 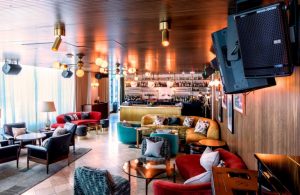 technology on-board — serve multiple roles, including: DJ monitors, side-fills, and as a compact portable solution for easy placement around the venue. Rounding out the main stage are VUE a-12 two-way systems serving monitor duty.The final components in this all-VUE installation is a distributed foreground solution made up of VUE’s i-8a 2-way powered surface-mount loudspeakers and is-26a subwoofers.Due to constant programming, installation was planned only a few weeks prior to opening night, which would feature a surprise performance by James Corden and Chris Martin.

When the crew arrived for sound check, there was no electricity to drive the audio as the contractor was still on site completing work. An hour before the opening set, alternate power was pulled from an independent transformer using a 60-amp extension cord. After being powered up for the first time the final configuration of the VUE system was completed with 30 minutes to spare.

“While certainly not how we planned it, but thanks in large part to the VUE team, lead by Jeff Taylor, and the system’s overall ease of setup, we were able to pull of the impossible,” says Bilgore. “VUE’s dedication to delivering a superior sonic and customer experience made for a very happy client, and some very entertained members. We couldn’t be happier.”