Kyle Hamilton is one of the most in-demand live sound engineers working today. Over the last 15 years, Kyle has amassed a roster of artists that reads like a who’s who of Hip Hop, R&B and Pop royalty including Kendrick Lamar, Janet Jackson, Rihanna, Pharrell Williams, Lalah Hathaway and Lionel Richie. 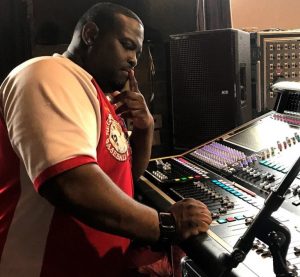 But Kyle’s impressive trajectory didn’t start like it did for so many in production circles. He never played an instrument or laid down beats on his laptop with friends after school. Faders and trim pots were always his keys and strings. Kyle was born to be an engineer. According to Kyle, his stepfather was the first to notice his interest in sound, and he made a point to encourage his stepson’s passion. “He told me I had a pretty good ear. He was a songwriter and producer who had some early success writing the song I JUST WANT TO HOLD YOU FOR JASMINE GUY. His dad was an engineer too. He was really the first to suggest a career in sound, and that was the first time I really thought about it as more than a hobby.”

While his stepfather’s early encouragement was undeniable, the creative exposure that ultimately shaped Kyle Hamilton’s ear came by way of his mother.

“Mom was an entertainment hair stylist. She did hair for the Commodores, Lionel Richie, and many others,” he explained. “That music was everywhere for us. It kept food on our table and filled our home constantly. I grew up with it. Went to football practice listening to it. I didn’t know it then, but these were the sounds that would define my career.”

Growing up in Pasadena Ca, Hamilton had numerous options to expand his training after high school.  He attended a college in LA with a diverse audio related curriculum.

With a plan to focus primarily on the recording side, Hamilton dove into his studies headfirst. He completed the whole course in just nine months with an impressive 4.5 GPA – going above and beyond through an exhaustive workload that included numerous extra credit projects.

“I was really hungry,” he laughs. “I took a full course load during the week and spent any extra evening hours or weekends shadowing Anthony Jefferies in the studio and on live gigs. I wanted to learn as much as I could and get a feel for that side of the business as well.”

Jeffries is the legendary FOH engineer behind such artists as Chuckii Booker, Chaka Khan, Gerald Albright, Will Downing, Portrait, Lalah Hathaway and Prince. “I met a lot of really talented and passionate engineers back then, and I learned from each of them. But Anthony was my mentor. I mimicked his style and his approach as much as I could. He had a huge impact on my career.”

With his education complete, Kyle’s wasted no time working his personal and professional connections to move his young career forward and further expand his skills behind the faders.

“One of my Mom’s clients was a play producer, and he had promised me I could mix one of his Plays after I finished school. When I graduated, he was working on a production of A Good Man is Hard To Find. The sound company was out of Tallahassee Florida– Sutter Audio. So he called the owner, Tom Haire, and told them I was going to mix his next production. My first job was FOH system and  mix engineer on that production.”

Fortunately for Kyle, Sutter Audio was also the go-to sound company for a number of big summer tours, as well as most of Tallahassee’s top local talent. Already accustomed to signing up for as many extra gigs as his schedule allowed, Kyle took full advantage of Sutter’s roster to expand his skills.

“That was a really educational couple of years for me,” he explains. “That’s where I got a crash course in load-in, load-out, and tuning systems under really tight deadlines. When I first started, I didn’t even know how to fly a PA. I just said ‘yeah, I can do that.’ But all companies do things differently, so send your crew chief out for a day or so to show me the Sutter Audio way. I was in the trenches. And it was very real.”

Never afraid of hard work and always able to pull off a challenge, the parade of opportunities just kept coming, and with each new success, Kyle’s reputation grew. When Dave Hollister’s sound guy missed soundcheck, Kyle was asked to sound check and then mix the show. “This was really my first gig with an A-level artist. It was a real turning point in my career because it exposed me to a whole network of artists, engineers and production managers on a national level.”

And indeed it was. Not long after the tour came to an end, Kyle got a call to be the systems engineer for the Isley Brothers. “At the conclusion of that tour, where I was mixing all the opening acts, I got a call from Woody Johnston, who was the Isley Brothers Tour Manager. He said ‘hey Kyle are you ready to mix the Isley’s?’ I said excuse me? What happened to your guy? Then he asked me again. ‘Are you ready to mix the Isley’s?’ I replied hell yeah!!!

“I was on the top in my mind because it was my second A-list client in a really short period of time, and also the first tour where I had a chance to make some real money. In fact, this was really the first time that I realized I could actually make a decent living doing this. It was never about the money for me – I love the art of it, and the technology. But knowing that I could actually build a life around this, and that I had what it took to expand into higher levels was amazing.”

The Isley Brothers turned into a multi-year relationship for Kyle – expanding his network and opening doors along the way. After the Isley Brothers, Kyle received a call to mix Avant, which was the opening Act for Mary J. Blige. “My work with Avant caught the ear of Michael “Huggy” Carter, the tour manager for Mary J., which led to led to eight years with Mary J. Blige.”

It was the relationship with Mary J. Blige that Kyle attributes to solidifying his reputation in R&B and Hip Hop circles.

When asked to sum up the single most important quality that differentiates his work, Kyle thinks first of his mom. “Well, it’s never really about just one thing, of course, but it certainly helps that I really know this music. These are the sounds that I grew up with. My mother made sure of that. It’s in my DNA.”

Today, when not on tour, Kyle Hamilton spends his time figuring out how to be in ten places at once. “I started Neversleep Productions in 2004 as a way to cover more than one tour at a time, while also giving back to an industry that has given so much to me,” he explains. “We look for talented young engineers who already have some chops and are hungry for a chance to expand their visibility. It’s more like your Ph.D. course. We really don’t have the time to teach the basics. They need to already have a foundation intact. Our goal is to take them to another level of mixing. As well as how to break through old habits, think outside the box, and mix the Neversleep way.”

It’s been a successful road for this young sound engineer who still has more days ahead than behind him, and indeed, Kyle Hamilton has never been more excited about the future.

“There’s so much happening on the technology side that will empower engineers to push boundaries in really cool ways,” says Kyle. “On the Kendrick Lamar tour, I was really pleased to launch the VUE al-12 line array, for example. That’s been a game changer for me. There’s just so much innovation happening right now with software, consoles – the whole signal chain, really. It’s really energizing.”