Cirque Italia, MIPRO 7-Series and a Whole Lot of Water 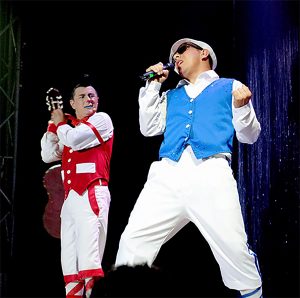 Cedar Rapids, IA – April 2017
As the first traveling water circus in the US, Cirque Italia’s stage holds 35,000 gallons of water and features a dynamic lid which lifts 35 feet into the air, allowing water to fall like rain from above as fountains dazzle below. This incredible show takes place under a majestic white and blue big top tent. With clowns and a laser show among the numerous performances, there is plenty to see in this captivating show. Wireless microphones are an integral component of Cirque Italia and, to ensure the best possible wireless audio performance, the show relies upon the state-of-the-art capabilities of wireless transmitters drawn from the MIPRO 7 Series catalog—distributed throughout North America by Avlex Corporation.

“With water seemingly everywhere on this show, it was crucial that the wireless systems not only exhibit rugged build quality, but robust transmission capabilities as well,” Smejkal explained. “Equally important, the beltpack transmitters had to be small so as not to interfere with the performers’ ability to move freely. Yvinsön Acerö, who serves as a clown, uses the MIPRO ACT-70HC handheld transmitter while other performers use the ACT-70TC bodypack transmitters with earset mics.”

“All of the performers have a lot of active moments during the show,” Smejkal added. “They are often swinging, spinning, bouncing, or hanging upside down while talking or singing. The MIPRO ACT-70TC bodypack transmitter is very compact—making it ideal to fit into the costumes. Equally important, the transmitter’s extreme durability is critical, given the demanding environment they are in. The rechargeable batteries deliver very impressive longevity. These transmitters are used an average of eight shows a week. It’s also worth noting that the mute buttons on the transmitters get a good workout since the show runs with very few technicians behind the scenes, so the performers are constantly operating these as they pass the systems from one performer to another.”

Due to the non-stop action on stage and the various fountains and other aspects of the show, the ability to ensure robust wireless signal transmission was a major concern during the design phase of the Cirque Italia’s new wireless system. Smejkal described the setup using the MIPRO ACT-74 UHF Quad-Channel Wireless Receiver, “Because of the size of the tent and the large aluminum structures everywhere, we decided to augment the ACT-74 UHF receiver’s two standard whip antennas kept at the mix position with two additional whip antennas, which are positioned on stands closer to the action. This approach ensures that signal remains strong regardless of where the actual mic transmitter happens to be. This system has over 400 selectable preset frequencies in 15 groups across an ultra-wide bandwidth over 72MHz, so finding and locking in clear, open frequencies—no matter where Cirque Italia may happen to be performing—is quite easy.”

Given the sophistication of today’s wireless microphone systems, questions inevitably arise. In this regard, Smejkal was very impressed with the customer and technical support services of Avlex Corporation. “Avlex has always had great customer support,” he said. “On the rare occasion when we have operational questions, they are always quick to respond. The fact that they are centrally located in Kansas City, Missouri for quick shipping just about anywhere is another benefit and the staff is both knowledgeable and efficient.”

Cirque Italia’s new MIPRO wireless system has been operational since February and Smejkal reports that the equipment has been working really well, “The system has proven to work very well for our client. The ease of using the mute function has proven very beneficial. Having the performers control their own mutes saves the multitasking technician responsible for lights, sound, sound effects, and live show announcements from having to keep track of them. The system’s long battery life, seamless operation, and easy adjustment of squelch and gain keeps the show running smoothly all the time. It’s been a win-win for all.”

About Avlex Corporation
Avlex Corporation, centrally located in Kansas City, MO is a leading supplier of high quality, feature-rich and competitively priced professional audio products. In business since 1999, Avlex supplies a wide variety of both wired and wireless microphones to dealers across the United States. The Avlex brand consists of three lines of microphones: Avlex ultra-low profile headworn, MIPRO wireless systems and the extensive line of Superlux wired microphones.