PSW Staff  – Primacoustic has observed a dramatic rise in NIHL (Noise-Induced Hearing Loss) that is leading restaurants and houses of worship alike to address dangerously high dB levels by installing acoustic panels that reduce the incidence of reverberant and ambient noise.

NIHL is a noise-related hearing condition that can lead to debilitating tinnitus, a permanent and untreatable constant ringing in the ears. 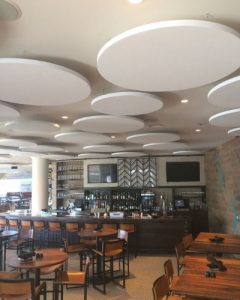 During peak hours, noise levels in restaurants can consistently reach well over 100 dB, significantly higher than the 85-dB ceiling at which OSHA says is a safe limit. This creates a hazardous working environment for restaurant employees who are exposed to the noise levels for extended periods of time, including waiters, cooks and other employees.

Highlighting this fact, reviewers have started to include the loudness of a restaurant as a ranking factor in ratings. And with good reason. A recent Zagat survey found that restaurant noise levels continue to rank as the top complaint of diners.

So how do restaurants and houses of worship turn down the volume? It’s not as easy as it sounds, especially in a restaurant environment where independent multiple sources, from patron’s voices to the clanging of plates and silverware each contribute to rising noise levels as activity increases. But sound absorption panels do offer a solution.

“Sound panels don’t attenuate source level dB, such as that of a voice or band amplified by a church sound system or plates clanging in a restaurant,” says Primacoustic’s Steve Dickson. “That said, acoustic panels will help lower dB levels by absorbing that sound after it leaves the source and stopping that sound from amplifying in the room, which can be caused by the sound bouncing off of reflective or hard surfaces.”

And it’s becoming clearer that acoustic treatment needs to be considered as a primary solution to address loud spaces, as modern design continues to trend towards harder surfaces and higher ceilings that will reflect sound.

A research study by hearing solutions company Oticon measured dB levels at restaurants in Austin, Chicago, Denver, Detroit, Nashville, and others during peak hours. The results were eye-opening. In many restaurants, dB levels reached over 120 dB during peak hours, the equivalent experience of standing beside or near an ambulance siren for an extended period of time.

Many restaurant owners, discouraged by the high cost of possible structural renovations warranted to address poor acoustics are finding a refreshing and affordable solution in the installation of  on walls and in ceilings.

“We started noticing a pronounced echo due to the 23-foot high ceilings we have in our restaurant,” says Christopher McFadden, general manager of Piva Modern Italian Restaurant in Vancouver, Canada. “This echo created too much bleed from a conversation being held at the next table, which was distracting and off-putting for our patrons.”

After the installation of the Primacoustic Broadway panels, McFadden noticed a dramatic difference in the dining experience at Piva. “I noticed a difference the first time I was in the restaurant after the installation was done. I was sitting at the bar, and 20 feet away I could hear the buzz of the restaurant but not the actual conversations that were happening at those tables. The acoustical improvement has been noticed across the board by our guests.”