A new speaker from a team of pro audio heavyweights . . . 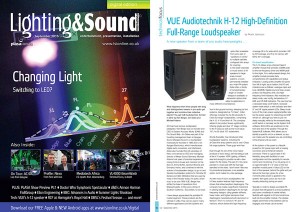 What happens when three people with long and distinguished careers in pro audio get together and combine their collective talents? You get VUE Audiotechnik, formed in 2012 by Ken Berger, Jim Sides and Michael Adams. All three have serious loudspeaker pedigrees: Ken Berger was co-founder and CEO of Eastern Acoustic Works (EAW) and Pro Sound Web. Jim Sides was part of the founding management team at Apogee Sound (Apogee Sound is a loudspeaker manufacturer founded in 1985 and is not Apogee Electronics, which manufactures digital audio converters, and interfaces). Sides also founded the US subsidiary of Nexo, and served as CEO and managing director of Meyer Sound Germany. Michael Adams took years of practical experience mixing front-of-house and monitors for the likes of Jimmy Buffet, Jackson Browne and Emmylou Harris, and combined it with the science of loudspeaker design, to go on and develop loudspeaker systems for Yamaha (IS Series) and QSC (Wideline) that are used by many in the industry today. It’s quite a brain trust, to be sure. With VUE, Berger has shifted his base of operations from Massachusetts, to the sunny climes of Southern California – Escondido, to be exact. 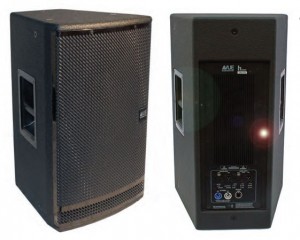 I have always appreciated the portable PA market segment. These products are the ultimate in utility. They can be used in many different applications and the systems are quite often scaleable from just a pair of “speakers on sticks” to multiple cabinets configured into arrays for covering a mid-sized corporate for music event, to fill speakers for large scale concert systems, or even permanently installed as a main PA system. Quite often, a family of complementary larger or smaller designs is available, or subwoofer options that allow for application in many different circumstances. Vue hit the ground running, releasing its first systems, designated as “h-Class”. Initial offerings included the hs-28 subwoofer h-Class full range loudspeakers, comprising the h-12, h-15 and the h-8. The company added to its product lineup significantly, offering single and dual 12” stage monitors to the h-Class as well as the hs-20 (dual 10”), hs-25 (dual 15”) subwoofers.

Shortly thereafter, Vue introduced other loudspeaker systems, including the al-Class line array systems and a- and i-Class full range systems. These guys work fast. Even though it’s one of the more mature products in Vue’s lineup, we’ll be taking a look at the h-12 system. KOR Lighting, of Miami, was kind enough to provide me with a loan system for the review. The pair of h-12s came packed in a road case with the Vue logo stenciled on the sides. I don’t know if this was for promotional purposes, or an available option, but it makes for a nice package. 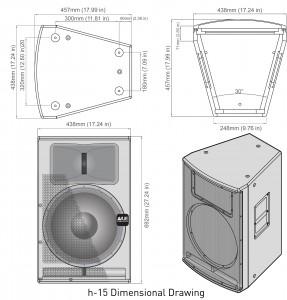 As with most of Vue’s loudspeakers, the h-Class system features high-frequency drivers that utilise beryllium diaphragms. The company has made a significant investment in utilising beryllium diaphragms for its high frequency designs, citing greater stiffness, lower mass, and higher resonance than diaphragms manufactured with aluminium or titanium. The h-12 comes in ‘W’ and ‘N’ versions, which denote the high frequency coverage (W is for wide which provides 100° by 50°coverage, and N is for narrow, with 60°by 40° coverage).

On-board amplification The h-12 utilises a two-channel Class D amplifier module that provides 2,000W peak for the low-frequency driver and 400W peak for the highs. For a self-powered design, the amplifier module provides fairly comprehensive I/O capabilities and status indication. Looking at the amplifier I/O panel from left to right, top to bottom, the I/O and indicators are as folllows: analogue input and loop, AES/EBU digital input and loop, power, protect, low-frequency limit, and high frequency limit indicators. Also included are sleep mode, user config, temperature, LF-6dB, and HF-6dB indicators. The next row has a recessed sleep on/off switch, recessed system reset switch, a wink indicator and then LF and HF signal present LEDs. Sleep mode turns off the main power supply/amplifier rails, but the power supply for networking and DSP remain on, although you have to put it to sleep manually, either by the recessed sleep on/off switch or remotely via the System VUE software. Wink LEDs are positioned on the front and rear of the speaker. Through the SystemVUE software, Wink allows you to identify a specific unit on a network, so you can make sure the speaker you are controlling is the physical unit you want.

At the bottom of the panel is a Neutrik powerCon AC power input with a looping connector and an Ethernet network connector. There is a good deal of I/O flexibility, along with facilities for user configuration and the capability for remote control and monitoring. It’s a lot going on in an approximately 6” x 6” area on the rear amplifier module panel. A blue LED on the front of the speaker, behind the grille and just above the Vue logo, glows for a few moments after power is applied to the system, then goes out so as not to be visually distracting during an event.

Typically, in order to design a portable PA product that will appeal to a broad audience and cover a multitude of market niches, flexibility with regards to I/O and control are built into the amplifier module. The doubleedged sword here is that switches can be engaged, and knobs can be turned accidentally, especially during transport and setup. As a result, ensuring speakers that are part of a larger system are all set identically can occasionally present challenges. With the h-12s, the few controls that are accessible on the amp module panel are recessed and can be activated intentionally. The remainder of the control is via the SystemVUE networking, monitoring, and control software control panel (more about that soon). That’s a feature I appreciate. Depending on the gig, the system could be preset at the shop, prior to being delivered to the event site, or configured once they are deployed.

The switch-mode power supply features auto-voltage detection circuitry that enables operation with AC mains from 120-230V. And, combining form and function, the aluminum heat sink has the Vue logo machined into it. As a guiding principle, Vue from its inception wanted to incorporate technology advancements in the design and manufacture of loudspeaker systems. In addition to utilising Beryllium for HF diaphragms, the amplifier module features Class D circuitry, DSP, and networking capabilities. 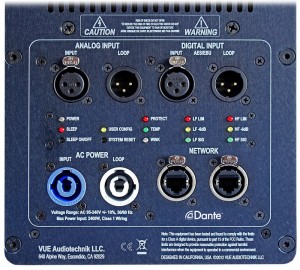 The h-12s are not lightweights, weighing in at a hefty 78lb (35kg). I’m sure the multi-ply birch cabinet accounts for some of the weight.  There’s no plastic here. The speakers are just a hair over 2ft (61cm) tall, 14.49” (37cm) wide (at the front of the trapezoidal cabinet), and 15.24” (39cm) deep. They come finished in black, with a black perforated metal grille. There are four rubber “feet” at the bottom of the enclosure to help prevent movement of the cabinet when deployed in a ground-stacked system due to vibration when things really get rocking. The feet are low-profile, so they won’t get knocked off during transport.

There is also the obligatory pole-mount socket, but it will take a couple of people to get these brutes up to working height. For permanent install there are also integrated rigging points for attaching optional rigging hardware. The h-12 is loaded with a 12” woofer comprised of a paper cone with a cloth surround and a 4” voice coil with a ferrite magnet. The highs come from the previously mentioned Neo Truextent beryllium diaphragm high driver with a 4” voice coil. The system provides a frequency response of 55Hz to 21kHz with a maximum long term SPL of 119dB and a maximum measured peak SPL of 125dB (the maximum calculated SPL is 134dB) at 1m.

System with a Vue Any self-respecting loudspeaker nowadays is sure to include the ability to network and the h-12 is no exception. In fact, all Vue loudspeakers or processors with DSP come factory equipped with SystemVUE. I like the fact that SystemVUE works with either platform (Mac or PC). It’s nice that Vue recognises that both operating systems are used in the pro audio industry. Other than a computer, all that’s needed is a wired or wireless Ethernet connection. SystemVUE provides the ability to monitor the amplifier heat-sink temperature, limiting and protection as well as providing alerts to fault conditions. Additionally, SystemVUE allows the enabling of system sleep and muting, changing of input and output levels, and input EQ, adjusting delays, and selection of input sources. The beauty of much of the digital technology available today is that updates and improvements can often be effected by issuing a new software release. And, that’s the case with the h-class; new software recently released at the NAMM show adds 10-band, software controlled EQ functions to all h-class systems. 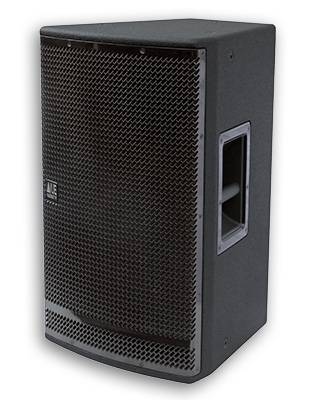 The beauty of powered portable PA is that it is plug-and-play, allowing for very fast setup. The h-12 has facilities for really enabling you to dial it in, but if you just need to get sound going quick, the h-12s will oblige. That functionality also holds true with the SystemVUE software. Once you connect your speaker, SystemVUE recognizes the device and starts working. How does it sound?

As advertised, the high frequencies that emit from the Truextent Beryllium diaphragm were extended and very smooth. The upper frequencies for both music and voice were very well-defined. Whenever I mix a live production that features popular music, I like to be able to hear the crack of the snare and the shimmer of the cymbals. I really appreciate good high end in a loudspeaker. That’s not to say the low end is lacking, but the highs are definitely the calling card for the h-12. The directional characteristics of the h-12 were also very good. The pair that I had was the wide version, which provides 100°of horizontal coverage and 50°of vertical coverage (-6 dB at the outside edges of the stated coverage). It’s obvious the attention to detail that was put into designing and manufacturing the h-12s, from both a performance standpoint as well as considering logistics (even the handles afforded a good, secure grip). If you are in the market for a well-thought-out, small to mid-sized, self-powered loudspeaker system, the h-12s definitely deserve an audition.