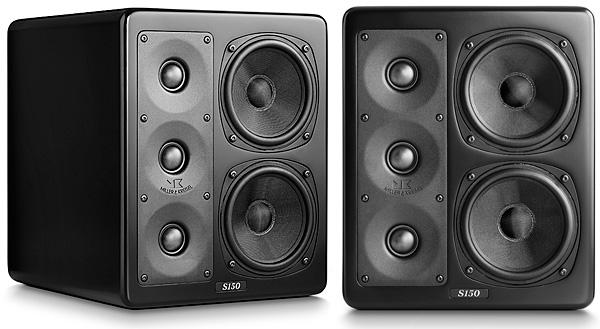 It was a sad day for home theater fans when M&K Sound exited the speaker-building business in 2007. Fortunately, a group of investors and former managers bought that company’s assets and created a new venture called MK Sound. To celebrate the company’s 40-year anniversary in 2013, the team decided to bring back the legendary M&K Sound company name, along with the original Miller&Kreisel brand. Today, top models from M&K Sound all carry the Miller&Kreisel name and I’ve had the opportunity to review a number of the company’s offerings, including the X12 Subwoofer and the S300 sub/satellite system. The latest offering to come my way from M&K Sound is the all-new Miller&Kreisel S150 Series, consisting of the S150 LCR speaker ($1,799 each) and the S150T surround ($2,599 pair).

Familiarity Doesn’t Breed Contempt
I’ve used a seven-channel M&K S150 speaker system consisting of three S150 LCRs across the front along with four S150T surround speakers in my theater for the past 15 years. I’ve always wanted to upgrade to an M&K Sound subwoofer, although cash has been tight over the past few years with two kids in college. Regardless, I’ve happily managed with a quartet of subwoofers that includes an SVS PC-Ultra, HSU 15H-MK2, and a pair of JL Audio D110s, all run through a MiniDSP configured to provide a flat in-room frequency response.

The original M&K S150 was regarded as one of the most accurate speakers on the market and served as a reference monitor for many music and movie soundtrack production facilities. The line was revised a couple of years after the purchase and rebranded as the S150 MKII. But as with all products over time, a further update was in order. Can this new version of the legendary studio monitor carry on the company’s legacy? 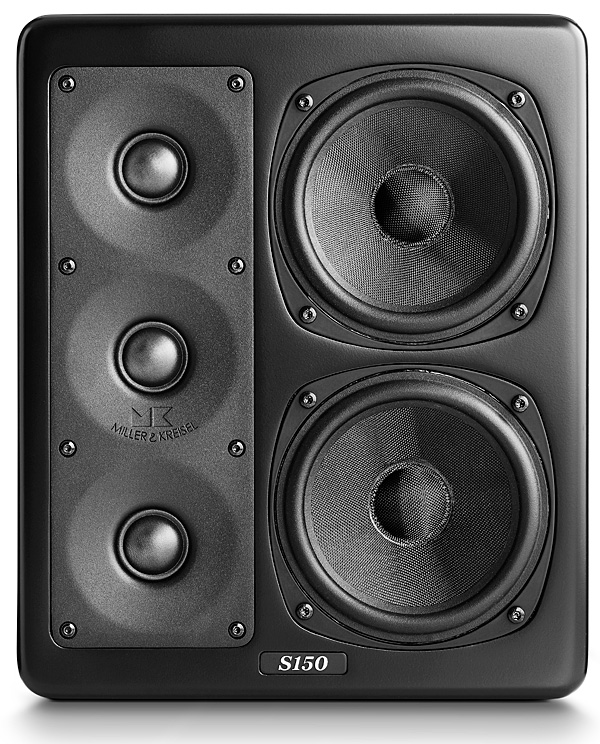 Nearly three months elapsed from the moment I was asked to write this review to the day that speakers finally showed up at my house, so when the boxes arrived I couldn’t wait to get them opened. These are beautiful speakers—a definite aesthetic improvement over my legacy S150s. For starters, the new cabinets are a smooth gloss black as opposed to a textured satin, so when dust settles on them, they are easier to clean. Granted, the glossy finish is prone to fingerprints, but that’s why M&K Sound includes a pair of white gloves in every box! My only gripe is that the S150’s speaker terminals don’t accept standard banana plugs. While that’s not a big deal— most users rarely unhook their speakers—those of us with a revolving door for review products prefer the ease of plug-and-play.

The original S150 line had dedicated right, center (in my case, angled center), and left speakers and each cabinet was constructed differently. The left/right speakers were toed in with their outside edge longer than the inside to create a 45-degree angle. M&K’s center speaker was designed the same way, but with a slightly longer top or bottom depending on if the speaker was placed above or below your screen. The original speakers, which conformed rigidly to THX specifications, also featured foam pads mounted between their three tweeters to make them as vertically directional as possible.

Although still THX certified, the new S150 is a different design than its predecessor. Each box has the same dimensions, measuring 10.4 x 12.5 x 12.2 inches (WxHxD). That change likely saves manufacturing costs, and the toe-in effect can still be carried out by angling the speaker to ensure proper placement. Gone are the foam pads between the tweeters: MK Sound has re-designed the wave guide in the tweeter faceplate to provide ideal focus and integration both when the S150 is used as a nearfield monitor (closer than 10 feet from the listening position) or installed at longer distances. 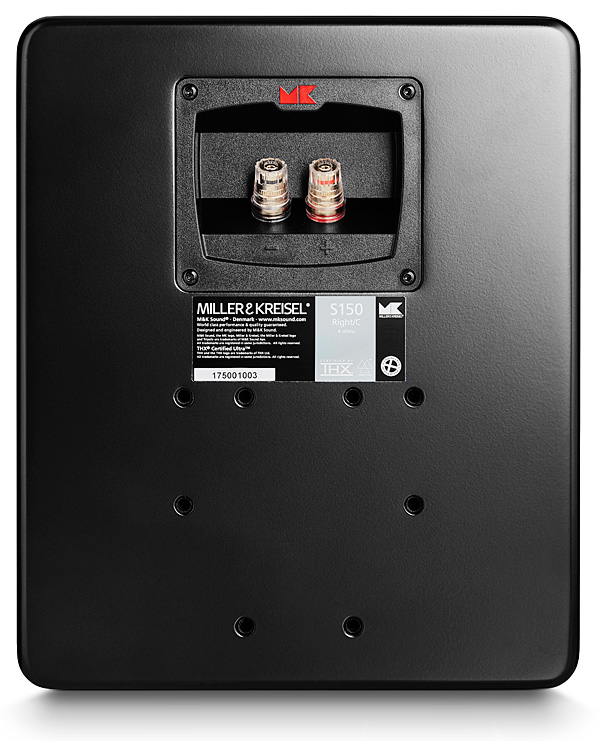 The S150 features two 5.25-inch fiberglass bass/midrange drivers and three 1.1-inch Danish-designed (from ScanSpeak) fabric dome tweeters. The Phased-Focused crossover was always M&K’s (and now the new M&K’s) secret sauce in that it has been critically tuned through psychoacoustic and complex computer time-domain analysis to achieve a uniform timbre balance throughout the listening room. This improves the three-dimensional response and provides a reference listening experience from virtually any position. (If you decide to audition the new S150s, be sure to move around the room to experience that effect since most speakers don’t sound nearly as good when you move outside the center sweet spot.) Like its predecessor, the new S150 has a 4-ohm impedance and M&K Sound recommends using between 25 watts and 500 watts of amplification. The more amp power the better—for my evaluation, I used a seven-channel ATI AT527NC (another S&V Top Pick) amp rated at 200 watts per channel.
Along with three S150s for the left, center, and right positions, M&K Sound sent four of its S150T Tripole surround speakers to create a seven-channel system. The S150T is just as beautiful as the S150, but with no mounting hole for a speaker bracket, it needs to be flush- mounted to the wall. According to M&K Sound, the S150T is voiced for a wall-mount installation, however. The S150T’s Tripole design makes it a unique surround speaker. It uses one of the same 5.25-inch mid-bass drivers found in the S150 coupled with a single 1.1-inch soft dome tweeter for the front baffle, plus two 3.5-inch drivers located on either side of the cabinet that are wired out-of-phase. The 10.4 x 10.6 x 5.9-inch (WxHxD) cabinet has a trapezoidal shape, with the rear wider than the front. The S150T’s design gives the listener the best of both worlds—a direct radiator for directional sound combined with a dipole for diffused sound. While Dolby doesn’t necessarily recommend dipole surrounds for Atmos setups, I’ve used the S150 Tripole speakers in my own Atmos setup for a number of years and actually prefer them to monopole surround speakers. But don’t take my word for it—audition them for yourself! 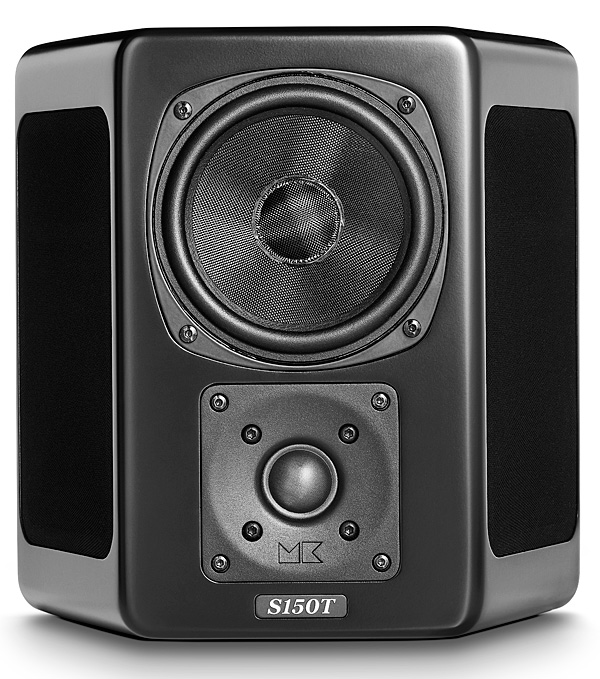 Performance
One of the things that originally drew me to M&K speakers was their imaging across the front soundstage. By using three of the exact same speakers, there’s no audible disconnect when a sound is panned across the front of the room—it’s like timbre matching on steroids. This same concept applies to the surround speakers; since they use the same exact drivers found in the S150, panned sounds move seamlessly around the room.

Among the first things I noticed was that the new S150’s midrange had a bit more heft. There was an improvement in dialog intelligibility, especially with male voices—something I heard both when watching movies and when sitting through nightly newscasts or sitcoms. Sifting through my earlier testing notes for the S300, I had made the same observation with that speaker. At the time, I chalked the change up to the S300’s larger cabinet size, but in hindsight it may have had more to do with the new and improved drivers than the actual cabinets. For confirmation, I popped my legacy S150 center speaker back in and right away noticed a difference. While the older speaker didn’t sound bad by any stretch, the new S150 sounded better.

I noticed differences when listening to music as well. Playing the title track from Billy Joel’s An Innocent Man SACD, the sound- stage was to die-for, with seamless imaging across the front of the room along with robust depth. Moving on to multichannel recordings such as Luther Vandross’ “Dance with my Father” on DVD-Audio, the sulky voice of the late singer floated in the room and each keyboard chord hit with precision.

As much as I enjoyed music on these speakers, movies really made them come to life. With the recent release of Avengers: Infinity War, I’ve found myself revisiting many of the previous Marvel films for a refresher on the backstories of various characters. When I popped in Iron Man 2, a film that pits billionaire superhero Tony Stark against a ruthless Russian physicist, The DTS-HD MA 5.1 soundtrack wasted no time in supplying demo-worthy material, with Iron Man leaping from the back of a military transport as AC/DC’s “Shoot to Thrill” exploded across the soundstage. When a payload door slowly dropped, explosions filled the room as Iron Man vaulted through a pyrotechnic display. With my Anthem AVM60 preamp/processor set for an 80-Hz crossover, the seamless handoff between the main speakers and subwoofers created a full-bodied presentation at multiple listening positions. For example, when Iron Man engaged a crowd, his booming speech, and the reverberation of the crowd’s raucous applause through the room, provided a convincing illusion of being a participant in an actual event.

It’s rare that a movie franchise improves with subsequent films, but that’s certainly the case with Mission: Impossible. The fourth film in the series, Ghost Protocol, was written and directed by Brad Bird, who notches up the action and intrigue to a higher level than the previous three M:I entries. As Ethan Hunt and his team chase a bad guy through a horrific sandstorm, The S150T surrounds did an excellent job rendering the disc’s Dolby True HD 7.1 soundtrack. During a high-speed chase, wind engulfed the entire room, yet I was still able to pinpoint discrete effects in the 360-degree soundfield that the M&K Sound speakers created.

In the end, it didn’t matter what type of material I threw at the S150/ S150T system, it handled it with ease, conveying the midrange and highs with clarity and unmatched accuracy. The speakers also played at reference level without revealing any sense of strain or fatigue.

Conclusion
Some listeners prefer their sound to be colored in one way or another. I don’t—give me what the sound engineer crafted, nothing more, and nothing less. The cynic in me initially worried that this updated S150-based system wouldn’t provide the same experience I’d grown accustomed to over the past 15 years, but that all ended up being wasted energy. M&K Sound’s updated speakers not just uphold the fine tradition of the S150 line, they improve upon it. Highly recommended.