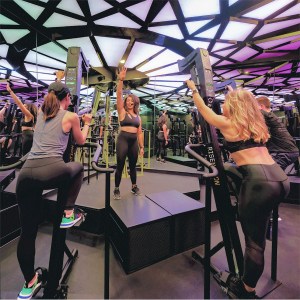 Founded by renowned Los Angeles personal trainer, Jason Walsh, Rise Nation is the latest entrant in the rapidly growing group fitness category. Centered around upright Versaclimb equipment, each Rise Nation is equal parts climbing gym and nightclub with geometric custom-lit ceiling installations and high-energy soundtracks. To ensure their clients keep climbing, Rise Nation selected Denver-area-based Contour Audio & Acoustics (“Contour”) to outfit both of the brand’s Denver locations with all-VUE systems centered around the newly released, ultra-high-output architectural e-Class system.
“While the trend in group fitness gyms is to deliver nightclub-level sound, Rise Nation raises the sound system game to a new level, so it’s no wonder patrons include celebrities and pro athletes,” explained Ryan Balentine, Contour CEO. “The head trainer for all Denver locations was checking out other gyms in the area and he happened upon an install that we did at a cycling studio. He said it was the best sound system at a work out facility he had ever heard and inquired about who installed it. That is how Contour got the gig for the three new Denver Rise Nation locations.”

Given Rise Nation’s high-energy immersive experience, coupled with the intricacy of a ceiling-mounted lighting system choreographed with each workout, Contour knew the newly released e-Class architectural element system would be the ideal solution. While the stand-alone flagship location in Cherry Creek allowed for unlimited SPL, the second location in the Highlands neighborhood had restrictions associated with the mixed-use complex in which it is located. 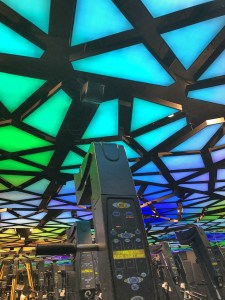 “The new e-351 was a no brainer for this installation given its output-to-size ratio,” explained Balentine. “The e-351 is capable of kicking out 118db from a 5” enclosure which made it the perfect choice for the tight space and the desired club-like experience the client wanted to deliver. Altogether the VUE system can easily handle the mix of electronic and hip hop music while clearly delivering enthusiastic instructor vocals on top of the mix.”

The Cherry Creek gym is configured in a baseball-diamond configuration with the instructor in the corner behind home plate and 34 climbing machines arranged in arched rows. The ceiling is a suspended deck with intelligent custom LED tiling sub hung from it. All walls are double 5/8” gypsum board with green glue; the walls to the left and right of the instructor are covered with mirrors.

“A big design constraint was that we needed to make sure the speakers didn’t cut off sight-lines to the ceiling-mounted LED tiles,” added Balentine. “There were also to be mirrors on the wall up almost to the bottom of the LED tiles so wall mounting the speakers was out of the question. This meant that we had to find small high output speakers that could fit in between the panels.” 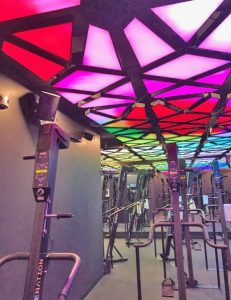 For the Cherry Creek location, the all-VUE system included 12x e-351 architectural elements and 2x i-6 full-range loudspeakers powered by 1x v242 VUEDrive Systems Engine designed specifically for the e-class. Two IS-15a subs provided more than enough low-end support.
Balentine cites the VUE system’s intuitive design along with the 24/7 support he and his team received from the VUE team for the ease of installation and setup. “The support from the team at VUE was great through the project. They were always super quick to get back to any questions I had—even after 5pm on a weekend. It was nice to be able to get ahold of them directly and not sit in a phone cue waiting to be transferred around like you get at some other vendors. Actual install, tuning, tweaking, and follow up was around two to three weeks for each location, which is pretty remarkable,” he said.
Most importantly, the Rise Nation team is incredibly pleased with the VUE system’s contribution to their brand promise: Rise Nation studios and instruction might surprise you — geometric custom-lit ceiling installations coordinate with your workout while powerful speakers get you climbing to the beat. Get caught up in the moment with your fellow climbers. In fact, the team is so impressed with VUE and Contour, that plans are already underway to outfit another location with an e-Class system as well. “The clients are very happy with the system and we are getting ready to start the design for the 3rd location here in Denver,” added Balentine.