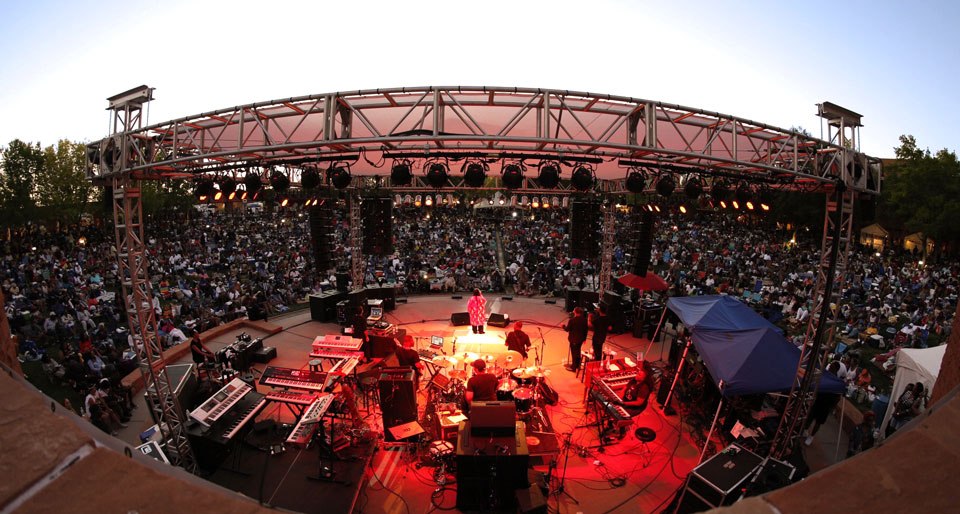 “ After I uploaded my settings into the Avid console with almost no tweaking, due to time, the system sprung to life. That’s rare, and a true testament to what VUE has accomplished. I’d be happy to take this system on road any day.” Kyle Hamilton of Neversleep Productions and Lalah Hathaway’s FOH engineer.

VUE Audiotechnik
Jazz festival sound is more art than science. It’s an exercise in purposeful subtlety and pure audio transparency that’s only mastered with the perfect combination of products and experience. So when the organizers behind this year’s Las Vegas City of Lights Jazz Rhythm & Blues Festival asked H.A.S Productions to provide the full production services for the third consecutive year, they were confident they were making the right call.

Understanding that jazz audiences are among the most discerning, H.A.S. productions took no risks — opting for an all-VUE system, complete with the flagship al-12 line array, hm stage monitors, and a full complement of h-Class subwoofers. The two-day festival, which is emphatically embraced by the local community, included such artists as the Gerald Albright, Lalah Hathaway, and Anthony Hamilton.

“There is a reason that the al-Class line arrays have been our choice for this festival for three years,” said Larry Hall, President of H.A.S. Productions. “The production manager, the promoter, and the guest engineers all enjoy working on the VUE rig. We were pleased to take the whole thing up a notch this year with the addition of the larger al-12 array.”

This year’s configuration included left and right main clusters of six, large-format al-12 boxes, augmented by two medium-format al-8 arrays, with eight elements each for side coverage. Front fill came courtesy of four VUE al-4 line array elements and a pair of h-15 two-way systems positioned at the front of the stage and atop the subs respectively.

On hand for the event was VUE’s own Jeff Taylor who served as system tech for the event along with Orris Henry whom also provided FOH support for the festival. “The key was achieving greater than 180 degrees of coverage while keeping weight under control, and also avoiding potential splash-back from the tall block wall immediately behind the stage,” Explained Taylor. “By using the al-8’s as side hangs, we minimized weight and covered the listening area perfectly — all while maintaining a consistent voice throughout the venue.”

But it was the large-format al-12, and it’s crystal-clear beryllium high frequency performance that was the real highlight for the various engineers who mixed the two-day festival. 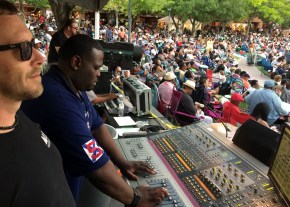 “Changeover between bands is difficult with festivals like this, and attempting to bring our full production requirements together on a small stage setup was a real challenge,” said Kyle Hamilton of Neversleep Productions and Lalah Hathaway’s FOH engineer. “Despite all the challenges, the al-12’s made getting the sound I was looking for easy. After I uploaded my settings into the Avid console with almost no tweaking, due to time, the system sprung to life. That’s rare, and a true testament to what VUE has accomplished. I’d be happy to take this system on road any day.”

Rounding out the system, H.A.S tapped into VUE’s patented ACM technology via twelve hs-28 subwoofers in two arced arrays on either side of the stage. A combination of VUE hm-112 and hm-212 systems served monitor duty, along with an additional pair of hs-28 subwoofers on drums for added “oomph.” A total of 18 VUE Drive systems engines delivered power and processing for the VUE line arrays and monitors.

“I was really amazed how present and out front the vocals were,” commented Eric Jones, FOH for Anthony Hamilton, who closed the festival to a packed house on Sunday evening. “I usually have to work to get the vocals where I like them, but with the al-12’s, they were just there. And the Subwoofers were really tight and full. There’s plenty of gas in those subs, which is critical for an artist like Anthony Hamilton.”